New Tile for the Entryway

There were a few problems with this little entryway.   Sometime in the past light tile was laid over the hardwood floor and right up against the baseboard, resulting in a slight change in floor height between the living room and the entry which required a threshold between the two spaces.  It also resulted in the entry baseboard being shorter than the living room baseboard which was awkward.   The light tile did brighten up the small entry but it also didn't fit with our current living room decor, which includes touches of black in the ceiling light, stair rails, entry table, and fireplace tile.   And for some reason the entry closet was carpeted with a thick ugly shag rug, just perfect for trapping the dirt and outside debris on our shoes and coats. 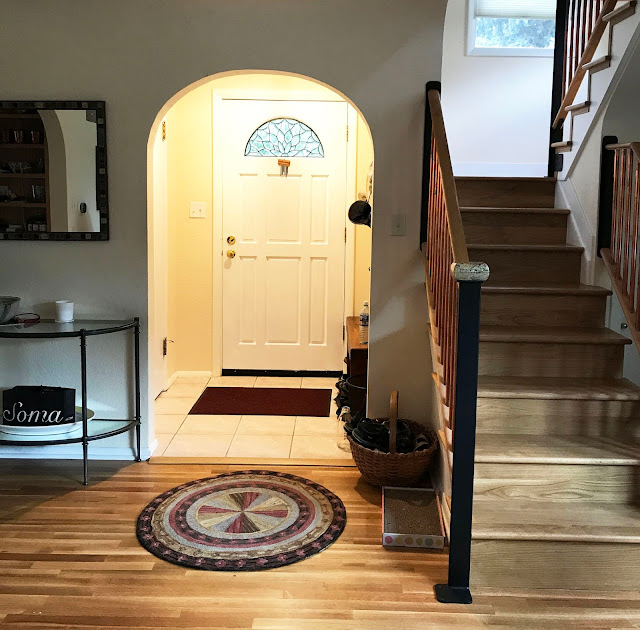 To fix these problems our plan us to take up the carpet, the old tile, the wood floor underneath, and the baseboard.  Then we'd install new black tile on a diagonal pattern not only in the entry but into the closet.  Then the baseboard would be reinstalled on top of the tile.

Last week we finally were at the top of the list of projects awaiting Giovanni, the talented Sicilian tile master who had tiled our three bathrooms and kitchen.

And here's how it turned out.   If you look closely you can see that the baseboard is now the right height and there is a smooth transition from the entry into the living room. 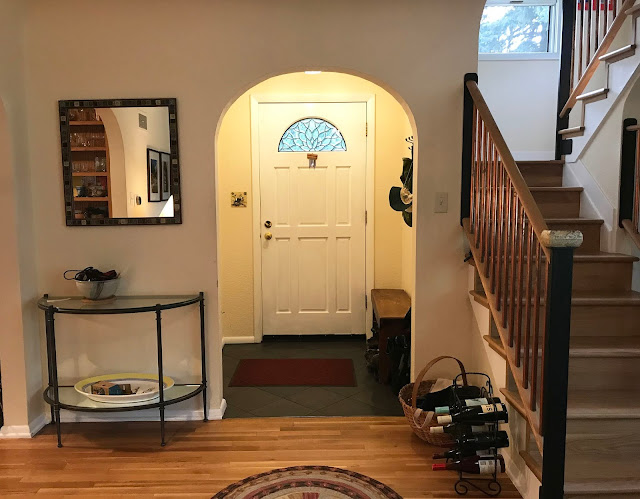 In this photo you can see the black fireplace surround and tile in the living room. 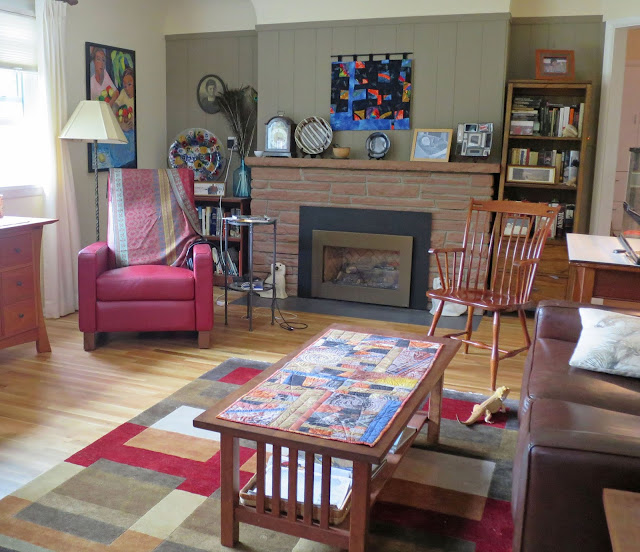 Here's some photos showing the diagonal pattern of the tile... 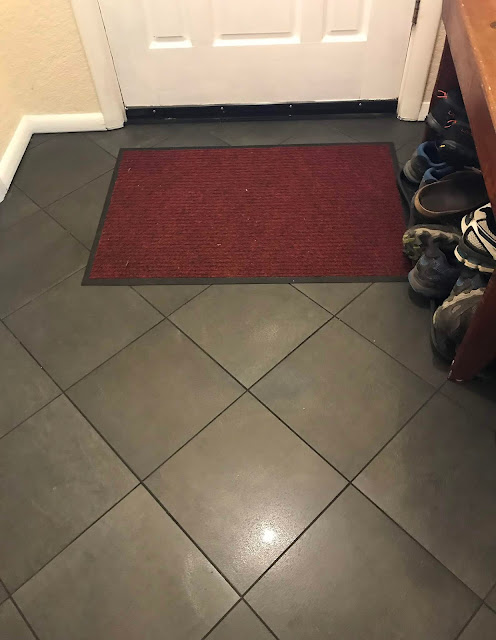 ...and how it extends into the closet. 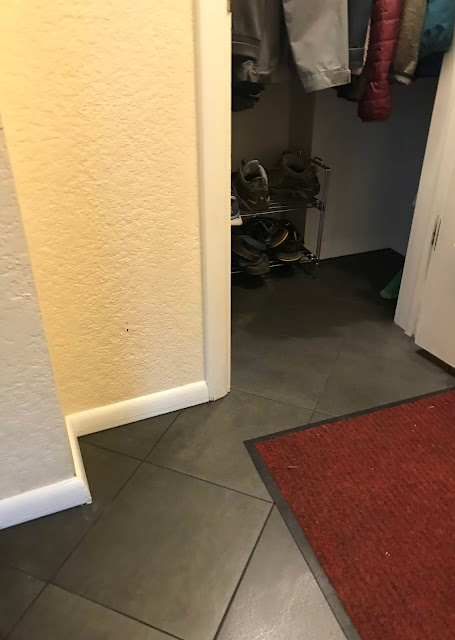 Giovanni and his helper Joseph did most of the project but Ben did a lot of work as well.  He emptied the closet and everything hanging in the entry, which sounds easy but is a real task.  We sure keep a lot of shoes, coats, and other necessities for getting outdoors in the entry, and it all had to be taken out and relocated for several days.  He ripped out the carpet and all the carpet strips and fasteners.  And while it was empty he painted the closet a nice bright white.  After Giovanni had all the baseboards out Ben sanded and painted all of them.  Now it all looks nice and fresh. 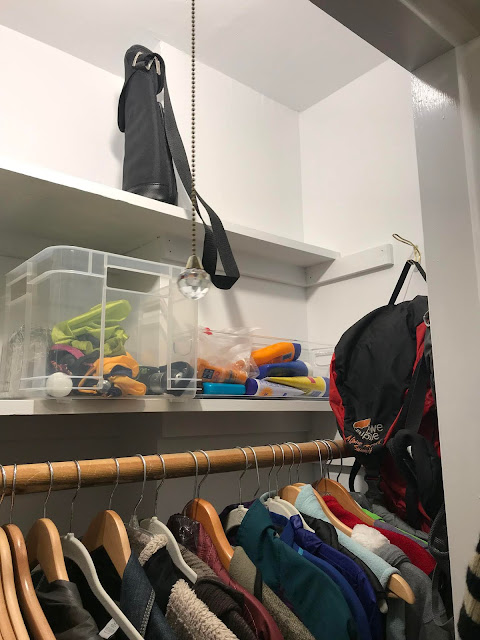 While I was taking photos of the improved space I snapped this one, which I think captures the current way we're spending much of our time --supervising Turbo.  When he's on the move so are we, and even when he's resting we're watching!   It's like having a toddler again, and it's both fun and absorbing. 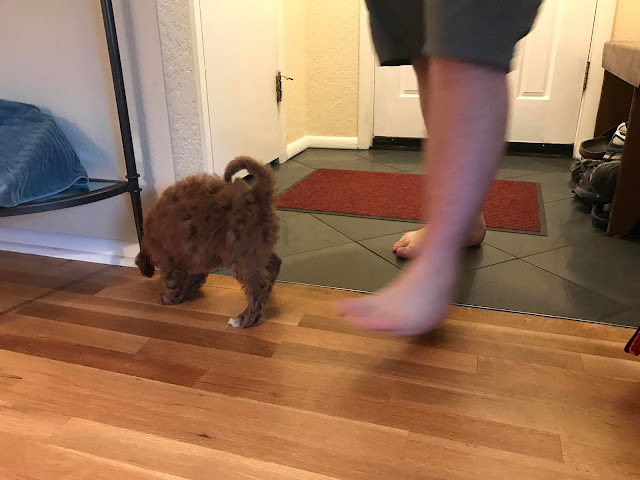 But I'm not going to leave you with a blurry photo of Turbo and Paul's feet!

Let's end with these two, taken yesterday when Turbo went with me and Dawn to our Pilates class.  Since we have a private lesson and neither Ben or Paul would be home to hang out with Turbo and he hasn't learned to stay home in a crate, the Pilates instructor kindly invited me to bring him along.

I got him set up and leashed to a chair and then basically ignored him.   He whined a few minutes but then settled in for a chew.... 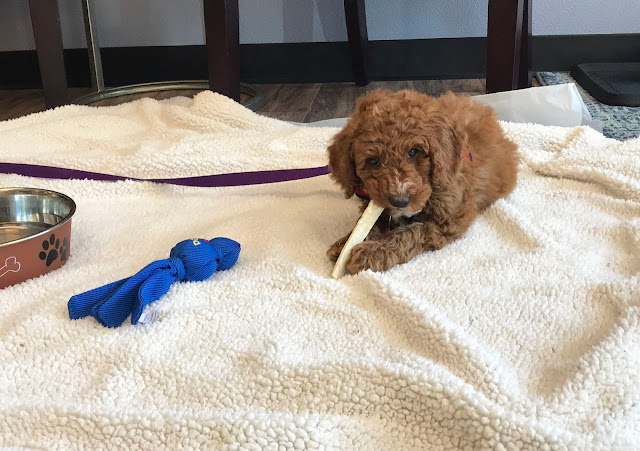 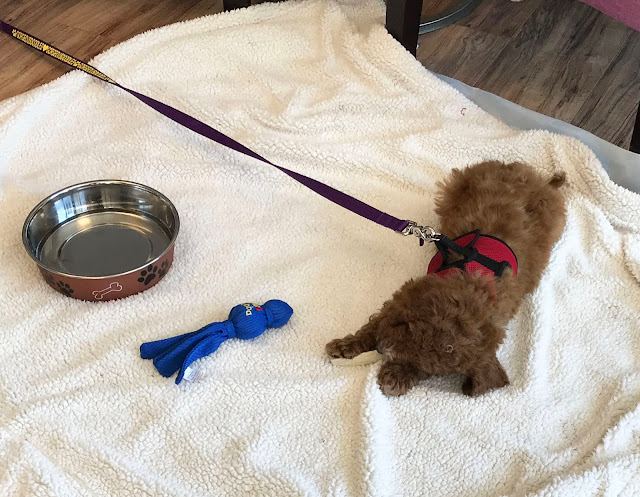 He was so tired out that when people came in for the next class and fussed over him, he slept right through it and then continued sleeping in Dawn's lap on the ride home.

What a good boy! 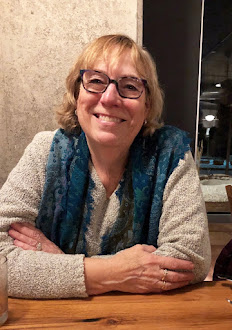